Global Incidence of Neurological Manifestations Among Patients Hospitalized With COVID-19—A Report for the GCS-NeuroCOVID Consortium and the ENERGY Consortium Posted on May 11, 2021 by admin 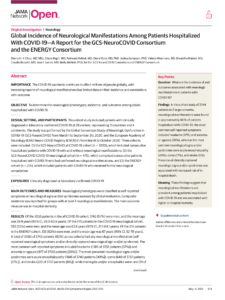 Posted in Uncategorized | Comments Off on Global Incidence of Neurological Manifestations Among Patients Hospitalized With COVID-19—A Report for the GCS-NeuroCOVID Consortium and the ENERGY Consortium
Activation of endogenous retroviruses during brain development causes an inflammatory response Posted on May 3, 2021 by admin 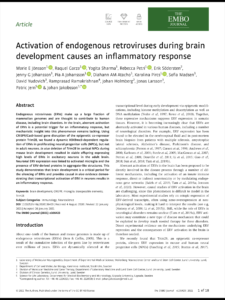 Posted in Uncategorized | Comments Off on Activation of endogenous retroviruses during brain development causes an inflammatory response
SARS-CoV-2 transmission without symptoms Posted on May 2, 2021 by admin

“Severe acute respiratory syndrome coronavirus 2 (SARS-CoV-2) has a potentially long incubation period and spreads opportunistically among those who are unaware they are infected. Asymptomatic COVID-19 cases are those that do not develop symptoms for the duration of infection, whereas presymptomatic cases develop symptoms later in the course of infection, but both are crucial drivers of transmission. …”

Abstract:”Efforts to contain the spread of SARS-CoV-2 have spurred the need for reliable, rapid, and cost-effective diagnostic methods which can be applied to large numbers of people. However, current standard protocols for the detection of viral nucleic acids while sensitive, require a high level of automation and sophisticated laboratory equipment to achieve throughputs that allow whole communities to be tested on a regular basis. Here we present Cap-iLAMP (capture and improved loop-mediated isothermal amplification) which combines a hybridization capture-based RNA extraction of gargle lavage samples with an improved colorimetric RT-LAMP assay and smartphone-based color scoring. Cap-iLAMP is compatible with point-of-care testing and enables the detection of SARS-CoV-2 positive samples in less than one hour. In contrast to direct addition of the sample to improved LAMP (iLAMP), Cap-iLAMP prevents false positives and allows single positive samples to be detected in pools of 25 negative samples, reducing the reagent cost per test to ~1 Euro per individual.”

Abstract: : “Interleukin-17A– (IL-17A) and IL-17F–producing CD4+ T helper cells (TH17 cells) are implicated in the development of chronic inflammatory diseases, such as multiple sclerosis and its animal model, experimental autoimmune encephalomyelitis (EAE). TH17 cells also orchestrate leukocyte invasion of the central nervous system (CNS) and subsequent tissue damage. However, the role of IL-17A and IL-17F as effector cytokines is still confused with the encephalitogenic function of the cells that produce these cytokines, namely, TH 17 cells, fueling a long-standing debate in the neuroimmunology field. Here, we demonstrated that mice deficient for IL-17A/F lose their susceptibility to EAE, which correlated with an altered composition of their gut microbiota. However, loss of IL-17A/F in TH cells did not diminish their encephalitogenic capacity. Reconstitution of a wild-type–like intestinal microbiota or reintroduction of IL-17A specifically into the gut epithelium of IL-17A/F–deficient mice reestablished their susceptibility to EAE. Thus, our data demonstrated that IL-17A and IL-17F are not encephalitogenic mediators but rather modulators of intestinal homeostasis that indirectly alter CNS-directed autoimmunity……”

Posted in Uncategorized | Comments Off on IL-17 controls central nervous system autoimmunity through the intestinal microbiome
Epigenetic variance in dopamine D2 receptor: a marker of IQ malleability? Posted on April 12, 2021 by admin

Excerpt: “Genetic variance is known to explain a substantial part of variability in cognitive capacity. The largest available study describes that polygenic scores (i.e., those common genetic variants that are most strongly associated with test performance in previous studies) explain up to 4.8% of the variance of general intelligence quotient IQ (gIQ). A more recent larger but not yet peer reviewed study, shows up to 5.4% of variance explained. On the other hand, environmental factors have a significant impact on general cognitive capacity, as indicated by the strong rise in average IQ performance following the decades after World War II.  According to Flynn et al. the change ranged from 5 to 25 IQ points (eg. 0.3 to 1.7 standard deviation (SD)) within one generation. This change appears to be too strong to be explained by genetic changes. While various environmental factors…..”

Posted in Uncategorized | Comments Off on Epigenetic variance in dopamine D2 receptor: a marker of IQ malleability?
Genomic region associated with protection against severe COVID-19 Posted on April 5, 2021 by admin 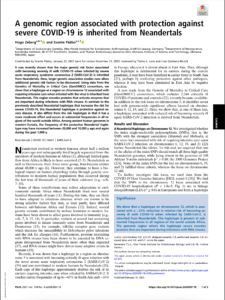 Posted in Uncategorized | Comments Off on Genomic region associated with protection against severe COVID-19
Physical activity and non-communicable disease burden Posted on April 1, 2021 by admin 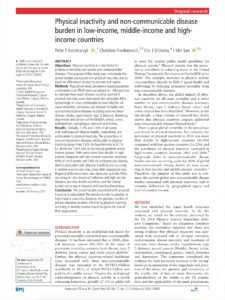 Posted in Uncategorized | Comments Off on Physical activity and non-communicable disease burden
Anti-inflammatory Effect of the Tricyclic Antidepressant Chlorimipramine Posted on March 27, 2021 by admin