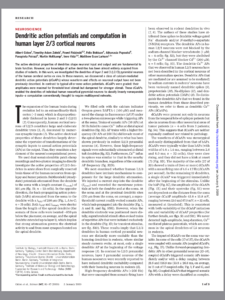 A special developmental program in the human brain drives the disproportionate thickening of cortical layer 2/3. This suggests that the expansion of layer 2/3, along with its numerous neurons and their large dendrites, may contribute to what makes us human. Gidon et al. thus investigated the dendritic physiology of layer 2/3 pyramidal neurons in slices taken from surgically resected brain tissue in epilepsy patients. Dual somatodendritic recordings revealed previously unknown classes of action potentials in the dendrites of these neurons, which make their activity far more complex than has been previously thought. These action potentials allow single neurons to solve two long-standing computational problems in neuroscience that were considered to require multilayer neural networks.”

This entry was posted in Uncategorized. Bookmark the permalink.